Success Criteria
Write code that includes iteration and add comments to explain how it works within the given program
TASK:

The second line  just prints out a message 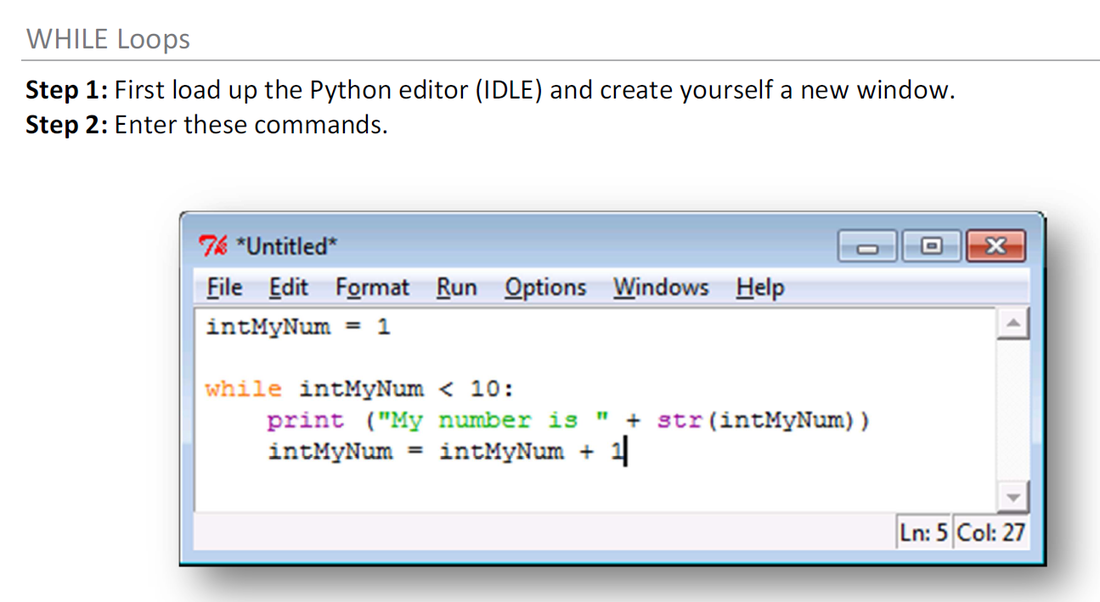 The first line should be easy to understand. It declares a variable called intMyNum and puts the number 1 in it.

The second line is the clever one. It tells the computer to execute the following instructions only if the value in intMyNum is less than 10.
Line three prints out a message telling you the current value of intMyNum.
Notice the str()  around the variable name? We need this because the value in intMyNum is an Integer data type but python can only print out String data types. The Str() command is converting the Integer in intMyNum to a String so it can be displayed.

Line four is incrementing the value in intMyNum (adding one to it). If we don’t do this then intMyNum will remain 1 forever and the loop will never end (because it will always be less than 10).
When line 4 has been executed the computer jumps back up to line 2, checks that the value in intMyNum is still less than 10 and if it is it executes the next instruction again.
Question - Why does the program stop printing numbers after 9 not 10?

Line 1 declares an array called strMyArray and puts five names in to it. Each element in the array is separated by a comma.
The second line is printing out the value held in the second element of the array.


Question - Why does the program print the name Dave not the name Ted?
Summary

Challenge 2: Create a simple chat bot that asks you questions and gives you feedback according to your answers.

Challenge 3: Create a Magic 8 Ball style program that generates a random answer when a user asks it a question.